Insulated Garage Doors: 5 Reasons Why the Insulated Part Is Important 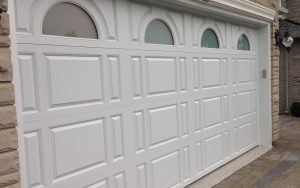 While awareness of the value of insulation has certainly crept into the collective consciousness in recent years there’s still one component of the modern home where insulation is often ignored but shouldn’t be: the garage door. Some don’t believe the garage door would benefit from insulation, some have insulating the garage door on their to-do list but just never seem to get around to it, while still others just aren’t aware how important insulated garage doors are. In this post we’ll do our best to make the argument for insulating your garage door.

Think about it for a moment. The garage door is the single biggest opening on your Toronto, Vaughan or Richmond Hill home. While little can be done to stop heat loss when the door is opened to let a car in or out, the fact is the door spends the vast majority of its life closed. Given that, here are 5 reasons why insulated garage doors are important.

Yes the benefits of insulated garage doors are many and significant. Don’t wait until your car won’t start on that cold January morning or the heating oil bill arrives and bowls you over. Insulate your garage door now and do your bank account and everyone in your house (including your car) a favour.

SmartDoors is the company for your new door. Look no further. We did our homework & Glad we chose SmartDoors. Michael Rapaport who installed our door is a caring & Pro in his field with an A+ After sales & Customer service. Strongly recommend it(...)

We recently installed 4 oversized barn garage doors and openers. They looked beautiful, we were very happy. Michael Rapport was both honest and professional. His pricing is very competitive. His work is impeccable. His staff is polite , ti(...)

Mike at Smart Doors educated us, gave a quote, wrote a one page contract for product, installation, disposal of old door. His crew did a timely and excellent job. Highly recommended. Read More

We have a tough project and I got referred to Michael at smart doors, they are very friendly and the service quality is very good. Our garage has very low ceiling makes it so difficult to install the normal garage door opener, I searched a produ(...)

I would highly recommend Smart doors. They were very knowledgeable and reliable. Product and installation are top notch. My garage looks great!

A very high level of customer service the only garage company that actually showed up and explained to me in detail what I was purchasing. They were not pushy and didn't try to sell me anything I didn't need. I contacted two other additional com(...)

Mike is a very nice , friendly and honest man , he gave us a very good and reasonable price for a very beautiful and modern garage doors . They came to our house exactly the time that he promised us , very professional, and an excellent, clean j(...)

Professional, polite and respectful. A perfect job with no mess left behind. I would recommend them for any project 100 times over!!! My new garage doors are amazing and look beautiful. Thank you!!! Read More

Smart doors is without a doubt your best bet for any garage doors related enquiry. if you're looking to buy a door, fix/repair a garage door and install one you can't find better run company than theirs.
When you call around and speak to other (...)

Work started and completed on time as promised when we negotiated contract. Workers did not leave until everything was working properly and to our satisfaction. Left property neat and clean. Would highly recommend Smart Doors. Read More

The best garage door company. Price is very reasonable and quality is the best in that price. And there service was also very smooth and nice. Please find Mike someone who is owner. He is very nice guy.

After checking a few Garage door brands, I knew C.H.I is the one I want. After checking manufacturer site, I got several dealers' info , including Smart Doors, from the site. called each one and got a few quotes from different dealers. I found M(...)

Excellent service and assistance . On time and as promised. Michael was very flexible in scheduling to fit in the installation during a large constructing project. Great job!

I have been dealing with Smart Doors for years, for different projects, either for my own house or for clients. They are very professional, always have new models of Garage Doors. Their Service is the best and care about their clients. I highly (...)

Wow amazing
My garage door spring broke last week on a day that was -30 . Mike sent one of his technicians out right away to replace it.
Not only did his tech come during a snow storm but he was on time, quick and never complained once about (...)

Michael, thank you and your team for an incredible work on our new garage door. Your installer arrived on time, was friendly and very professional. The door was amazing, workplace was clean and the price was excellent as well when comparing to o(...)

LOVE my new garage door. Was referred by a family friend. Michael was quick to respond and knowledgeable in answering my questions. I had called around and the price was by far the most competitive. The door and opener was installed with no prob(...)

I would like to endorse Michael at smart doors. I am a guy that does his "homework". I don't make a decision without three quotes. Michael won the bid on all counts. He advised us on color and style; he was professional and his quote was very co(...)

We needed to replace our 30+ year old garage door. After our initial call , Michael called us back and arranged an appointment within 1 day. He arrived promptly and provided us with our choices. He showed a gallery of his work and told us (...)

Excellent work and professional. Would highly recommend and use their services in the future.

We were so impressed by the wonderful job that your crew did!
On time, on budget, works beautifully! We are 100% satisfied we would definitely recommend them to our friends and family! Great job! Read More

Michael replaced garage doors for 3 of our neighbours. He did a great job so we hired him. He and his helper arrived as booked, were neat, efficient and did everything as promised. We are very happy. Read More

Can't say enough good things about my experience with Smart doors. From start to finish service and professionalism is second to none! Door garage installation quality are amazing. The prize are very reasonable and I’m definitely would recommen(...)

We replaced our garage doors last month - Octobet 2016. I was extremely happy with the quality and service from Michael and his team at Smart Doors. The job that was done exceeded my (very high) expectations. Michael was a a pleasure to de(...)

Got a new garage door installed for my townhouse, needed one that would match my front door. Mike and his staff were very pleasant and accommodating to my needs. Answered all the questions, in spite that i called 3 times. I had been searching fo(...)

Smart Doors did an excellent work in the replacement of our garage doors. On top of that, Michael was so patient with the important delay that our renovation project encountered and he pleasant to work with (great sense of humour). We recommend (...)

We couldn't be happier with our two, full view, black garage doors. They look amazing and work just as well. The process of working with Smart Doors was very smooth from quotation to installation. A written quote was provided with all details an(...)

Michael did an amazing job replacing our three garage doors efficiently. He is extremely accommodating and professional and his services were most appreciated. I would recommended his services to anyone that is thinking about replacing or servic(...)

Replaced at builder garage doors with insulated foam injected R16. Michael and his install crew were very quick and professional on time to turn around my order and even worked in the cold weather to complete the job. The capping and seals match(...)

If you are in the market for a garage door replacement or a new garage door, save your time and money and call these guys. They are honest, fast and do a great job. the price is within the other people I called but the other guys had no experien(...)

Smart Doors Inc. installed New Insulated Long Panel Carriage Garage Door and Opener with Wifi Keypad early February 2017 and we were very happy. Our garage door looked beautiful!!! The White Aluminum Capping they installed around the frame was a(...)

Just back off with my car, tried to close the garage door. One of the cables broke as well the door. In less then an hour Michael came, check the situation and gave three option to choose from. I chose to buy a new garage door. Michael advised m(...)

They showed up on the coldest day of the year to fix my garage door within hours of me calling. Fantastic service. Highly recommend for all your needs

We found Smart Garage Doors through HomeStars and with their top ratings we decided to give them a call - Michael responded and came over to our house right away to give us a competitive quote. Overall, we had a pleasant experience with Michael.(...)

Great garage door! I saw the Smart Doors sign on the lawn in the neighborhood and contacted them as my door needed to be replaced. Michael responded quickly and we setup a meeting at a convenient time for me. Michael explained my options as well(...)

The doors we ordered were spectacular and the installers were here on time, the doors work perfectly, they were efficient with their time and we are very glad to have chosen them to install our garage doors. Read More

I have been looking for a garage door installer for a few weeks. I was very impressed when I met Mike from Smart Doors Inc. Mike is very professional and knowledgeable. Being in the home renovation business myself, customer service and quality w(...)